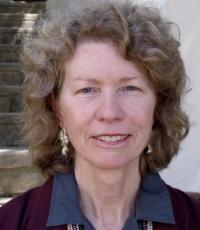 “Ann Van Steenberg was raised in western Nebraska, most of her early life spent in Mitchell, a town of 1,800 fit between soybeans and sugar beets outside of Scottsbluff. She attended the University of Nebraska in Lincoln, emerging with a degree in English literature. She arrived in San Francisco in 1968, and true to the spirit of the era, she founded an alternative high school with a handful of young fellow teachers. Later, she waitressed at the Wine Cellar in Ghirardelli Square, taught English as a second language, and finally undertook what seemed the most natural fit in vocations as a psychotherapist, a career lasting nearly 40 years which included her private practice and more than a decade as head of counselling at Holy Names University. Ann had an intense gift for friendship, her deepest relationships spanning decades. Tall, stately, beautiful, brave, zany, empathic and deeply creative. An excellent photographer whose work appeared in national magazines. An ardent gardener, carpenter, and mason who reimagined, designed, and labored endlessly in her Oakland home and yard. Beloved spouse, deeply loving sister, irreplaceable friend. She joined the PD Active board in its earliest incarnation and thrived amid the classes and the friendships she developed. Early on, she spoke of Parkinson’s as a kind of “gift” that slowed down her busy life and further opened her heart. She remained relentlessly courageous, always interested in other people, open to the joys of music, food, and friendship. She passed on Jan. 29, 2021, at the age of 74.”

September Speaker Forum: Hope and reality on the path to curing Parkinson’s disease: My perspective as a patient, scientist, and entrepreneur with Matt Jacobson

Topic: Hope and reality on the path to curing Parkinson’s disease: My perspective as a patient, scientist, and entrepreneur with Matt Jacobson
When: Saturday, September 10
Time: 10:30 am – 12:30 pm. PT
Where: Online
More Information: Here.
Registration: Here.