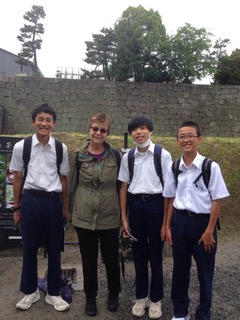 Think of your high school science fair on steroids. Add in a very large slice of the cutting edge of scientific research, a taste of ages old alternative health practices, plenty of exercise, and over 2600 delegates – patients, researchers, care partners, and medical professionals.  That was the 2019 World Parkinson Conference that I had the privilege to attend this June in Kyoto, Japan.

This was a gathering that could be both deeply inspiring, bringing hope of a possible cure for Parkinson’s, amazement at the dedication of so many individuals to the scientific research, and at times deeply frustrating. We have learned so much about Parkinson’s in the past decade, yet it doesn’t feel like we are any closer to a cure.

Some of the topics of the main lectures and presentations at the conference included the latest research on alpha-synuclein and the role it plays in the progress of the disease and the effect that different genetic mutations may have in contributing to disease. Another underlying theme of the congress was the growing recognition that individualized medicine will play in the treatment of Parkinson’s.

More than 250 different research projects were presented on posters and medical abstracts. The wide diversity of research topics reflected the complexity of Parkinson’s.

Perhaps the best part of the Congress was the opportunity to meet and share experiences with other patients and with medical and research professionals. Learning from the struggles and insights of so many people was inspiring.

Click here to read the abstract for all the presentations.

When I was first diagnosed with Parkinson’s disease, I made rules for myself about what I could and could not do concerning travel. I have broken these rules one-by-one. The last rule to go was that I couldn’t travel alone internationally. I really wanted to go to the World Parkinson Council (WPC) in Kyoto, Japan, but my usual travel partners were unavailable. I returned to my pre-diagnosis travel rule: I prefer to travel with a friend, but if that’s not possible I will travel alone. I also knew that for half of the time, I would be at the congress, and that was the main purpose of the trip. What I hadn’t expected was that I would fall in love with Japan on my way to and from the WPC.

In planning, I made sure I had an easy non-stop trip to Tokyo, which meant that I landed Tokyo at an ideal time; I got to my hotel at 4 p.m. and went to bed at around 8, so I was minimally jet-lagged the next day. I had arranged for a guide for one day; I met him at 10:30 a.m., and he efficiently guided me through the process of arranging my bullet train ticket to Kyoto and buying the Japanese equivalent of a BART Clipper Card that could conveniently be used in both Tokyo and Kyoto. I also requested a visit to one of Tokyo’s famous cat cafes, Mocha Cafe, which was, according to Google Maps, a mere .2 miles from my hotel.

Fairly soon in my trip, I realized that I was very happy traveling alone because I could do whatever I wanted whenever I wanted, and often that meant ending my touristic day at 3 p.m., resting, going out for dinner and maybe a short walk close by, and spending a quiet evening in my hotel room. I was bored with my book and almost all TV was in Japanese, so invariably I would get out my travel watercolors and do small paintings based on photos taken during the day.

Fast forward to the end of my trip, where I would spend one night in the same hotel I had stayed in my first three nights in Tokyo. I decided to step out of my comfort zone and go out by myself after dark. I visited the Mocha Café again, which was, as I mentioned before, a mere .2 miles from my hotel. I cavalierly left my back up iPhone battery in my hotel room. What could possibly go wrong? My phone died on my way to the cat café, but I figured I could find the café without my technological crutch. I succeeded, but returning to my hotel was another story. It was 9:30 p.m. in the rain and everything looked like the set of Blade Runner. I was becoming fatigued in the way that only people with Parkinson’s can understand, and my inner battery was about to go the way of my iPhone. I asked a young woman where the Godzilla Hotel was. (I was staying in the Hotel Gracery, and there was a giant Godzilla on the roof.) Her English was quite good, so we were able to determine that I wanted to go to the Hotel Gracery in the Toho Building. She told me that she didn’t have anything to do and that she would walk me to my hotel.

When I tell people this story, they think it sounds scary. It was a little nerve-wracking, but not nearly as much as it would have been if it had happened in the United States. Japan is very safe, and everyone was willing to help me, but only if I approached them and asked. Asking for help is the number one travel tip that I have for travelers with Parkinson’s in Japan. Another important piece of advice is to have your navigational act together before you go. It wasn’t crucial that I be able to call or text. I used email to stay in touch with people. It was, however, crucial to have a phone with Internet, a navigational system on my phone (Google Maps works), a personal WiFi hotspot (I used Japan WiFi Buddy), backup batteries and cords for everything, and a good old-fashioned map. In retrospect, I wish I had practiced using walking and public transportation Google Maps directions before going to Japan. This may sound daunting, but it was also part of the fun. I suggest that you plan as much as possible in advance and be prepared for your plans to go awry. A final note is that when traveling by train and subway, be aware that you might have to carry your luggage up or down a few stairs. I mitigated this problem by minimizing the number of moves that I made. Solo travel is a great way to get to know a place, and as a person with Parkinson’s traveler, it is possible to plan for the adjustments you need to make — whether these adjustments be a companion, an organized tour, or both. Break your own rules about what you think you can or cannot do, be aware of your limitations, be careful, and above all, have fun.