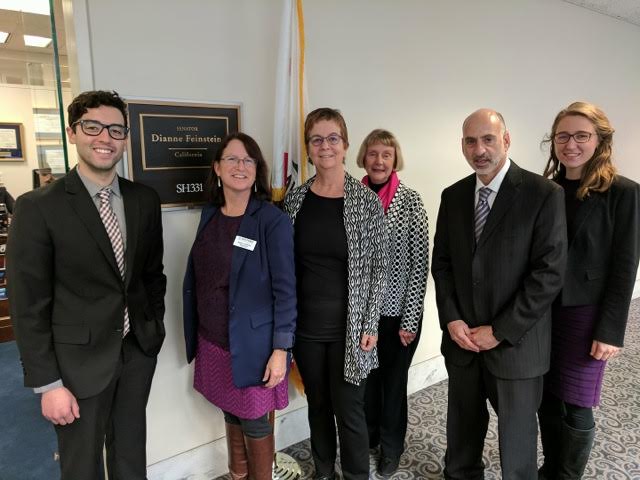 The Forum began with two days of educational panels where attendees learned about recent research advances and current policy issues affecting people with Parkinson’s, as well as their families and care partners. We also received training on how to build relationships with lawmakers through effective advocacy. A highlight was a breakfast appearance by Senator Cory Booker, whose late father lived with Parkinson’s. In his keynote speech, Booker underscored the importance of advocacy when he said, “I tell each and every one of you, what you do matters.”

On the final day of the event, advocates were scheduled to head to Capitol Hill for congressional meetings but the government shut down due to a snowstorm. Despite the storm, advocates made sure the Parkinson’s community was heard on Capitol Hill by contacting representatives through phone calls, emails, and social media. Some advocates recorded short videos and posted them to their legislators’ social media feeds. Although “Social Media Day” was unplanned, we suggested to organizers that they include it as part of the agenda next year because it was so successful.

Nancy was able to stay an extra day in Washington with some other Forum participants, and the group rescheduled meetings with staffers in Dianne Feinstein’s and Kamala Harris’ offices. The focus of these meetings was to succinctly tell our personal Parkinson’s stories and to conclude with three specific “asks.”

Nancy went to these Capitol Hill meetings with several PD advocates from other parts of California. The meetings began with staffers’ being asked if they knew anyone with PD and how much they knew about PD. This was followed by a short explanation about PD. The staffers she met were most interested in personal stories. One of the Forum participants, Amy Carlson, had a slideshow on her tablet to illustrate her life before and after her diagnosis, as well as, videos of her “off” times that illustrated that we don’t always look and feel as well as we may have when visiting Capitol Hill during our “on” times. Amy also included photos of people in her PD community who had passed away or were too disabled to come to Washington D.C. Nancy was able to add a few pictures to the slideshow to tell her personal story as well. The meeting was concluded with the group’s three “asks” as listed below and the staffers were provided with short versions in oral and written form:

1 – $5 million for the National Neurological Conditions Surveillance System. This system was authorized by the 21st Century Cures Act for the purpose of gathering comprehensive demographic information on people with neurological diseases, which is something scientists currently do not have. This lack of core knowledge makes it difficult to assess potential environmental triggers and other patterns of disease. The system will provide scientists with data to refine and target their research, which could lead to better knowledge of complex neurological diseases, new treatments, and cures.

2 – $20 million for the Department of Defense Parkinson’s Research Program, which studies how events in the line of service, such as toxin exposure and traumatic brain injury, may lead to the development of Parkinson’s in our nation’s service members and veterans.

3 – At least $38.4 billion for the National Institutes of Health (NIH). We urgently need a cure for Parkinson’s. NIH funding can help us get there. The agency supports approximately $169 million in Parkinson’s research, and its work is vital to the development of treatments to slow or stop the progression of PD.

Upon returning to the Bay Area, Nancy contacted Barbara Lee’s office in order to continue advocating for Parkinson’s funding here in the Bay Area. Brooke participated in an online webinar to learn more about local advocacy strategies.

If anyone in the PD community (People with Parkinson’s and supporters) wants to get involved with advocacy work, a good place to start would be to write to your Senators and Representatives and to include the story of your personal connection to Parkinson’s and the three “asks” listed above. As mentioned above, we would also like to form a group for local face-to-face lobbying. You should also consider going to the 2019 PD Forum next March. It’s an important time to get involved because Congress is currently negotiating funding for the fiscal year 2019. They just passed the 2018 budget, which includes a $3 billion increase for NIH for this year.

For more information and/or to join in advocating for PD, please contact Brooke at brookedeputy@gmail.com and/ or Nancy at nhusari@gmail.com. They look forward to working together and with others from the PD Active community for PD.