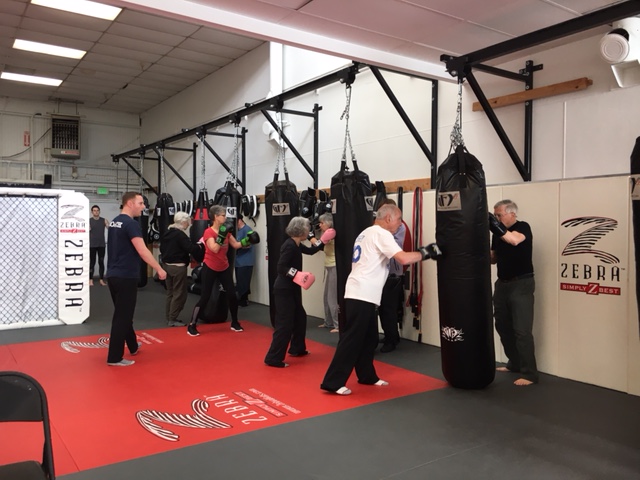 This article written by Karen Garrison was originally published in Berkeleyside on December 5, 2017, and has been reposted with permission from the author.

People with PD take a boxing class at Performance Fitness in Albany to keep fit and improve their coordination. Studies show that exercise can relieve symptoms that medicine cannot reach. Photo: PD Active

Meris Emory likes to mix fitness and fun; her weekly routine includes yoga, dance and boxing. Few people would guess from her workout that Emory has Parkinson’s disease (PD), a degenerative condition that once meant surrender to an isolated and sedentary lifestyle.

Today, that outcome is no longer a given. Though Parkinson’s remains a scary, relentless disease for which a cure has yet to be found, plenty of people with PD are now combatting isolation—keeping fit, learning new skills, staying connected to old friends and making new ones for many years after their diagnosis. At the heart of this movement is Berkeley’s PD Active, a feisty, home-grown non-profit started 10 years ago by and for people with Parkinson’s.

Studies now show definitively that exercise and mindfulness can relieve PD symptoms medication can’t touch, possibly even slowing the progression of the disease. PD Active board members have done their homework. The organization has provided seed money and other forms of support for a broad range of activities demonstrated to produce health benefits for people with PD—improving balance, agility, mental focus and wellbeing. Though hardly a household name, PD Active is pioneering an approach that has helped make the East Bay Parkinson’s community one of the most vibrant in the nation.

“Dance makes me feel fluid again, yoga helps me relax, and boxing makes my whole body more flexible and more powerful,” says Emory, who lives in Oakland. “The added bonus: we’ve become a supportive family for each other, and I look forward to seeing friends in class.”

For many people with PD, including me, medication provides some much-needed relief from motor symptoms like tremor and rigidity. But a host of other symptoms — from fatigue and insomnia to clumsiness and depression — respond better to a combination of movement training, exercise, mindfulness practice, connectedness and creative activity. Pete Stewart, diagnosed over a decade ago, had this to say about a nationwide boxing program for people with PD: “Of all the pills I’ve taken, Rock Steady Boxing is the finest and most effective.”

Herb Heinz, a founder of PD Active and former composer, has lived with the disease for 18 years. He says: “Joining a Dance for PD class 10 years ago changed my life. It allowed me to be in my body in ways I had never imagined.” No longer able to compose, he added a room to his house outfitted for dance, music, yoga and multimedia activities. He calls dancing his “joy practice,” and welcomes others to enjoy the space too. That spirit of community and creativity typifies PD Active and its members.

An estimated 60,000 Americans are newly diagnosed with PD each year, not counting the thousands who go undiagnosed because each case is unique. A new study reported by the University of Rochester Medical Center refers to PD as a “looming pandemic.” Over a million people in the U.S. live with the disease, the second most common neurodegenerative condition in the nation after Alzheimer’s. PD’s correlation with aging—and the baby boomers now swelling the ranks of senior citizens—is pushing those numbers up, heightening the need to better understand the causes of PD and find effective treatments for the whole range of its symptoms.

PD Active is on the front lines of efforts to encourage people in our community with Parkinson’s to test various activities designed expressly to improve our quality of life. Not everyone is able to exercise at the same rate, but classes and groups allow participants to find their own level. PD sponsors many classes in the Bay Area and has a comprehensive list of where people with PD can exercise.

Participants in the class RockSteadyBoxing at Performance Fitness in Albany. Photo: PD Active

Many feel helped by working out regularly. Joanna Uribe, shown punching a bag in a Channel 2 news clip on Rock Steady Boxing, at Performance Fitness in Albany (which PD Active subsidizes) says “when I’m hitting the bag, I’m fighting back against PD.”

PD Active raises funds to help new classes get started, mobilizes volunteers and sponsors social events. The group has raised money to train instructors for yoga and chair yoga for PD and for a movement class called PWR!Moves. PD Active volunteers host a salon for writers and artists with PD and a singing class that hones speaking, breath control and voice skills. To keep members informed and engaged in our treatment plans, PD Active circulates a newsletter and holds a quarterly forum featuring experts on topics like current research and alternative treatments. It sponsors support groups, a picnic and other events that keep people connected. Classes and other activities are bustling, steadily attracting more participants.

“The enemy is isolation and depression,” said Heinz. “Probably only a fraction of people with PD participate in classes. That means a lot of people may be missing opportunities to be more connected and more fit. There’s often an instant, deep empathy when you meet another person with this disease. PD Active aims to make those positive experiences available to more people.”

PD Active does all this with a tiny budget, an energetic part-time employee, and the passionate caring of many volunteers. Going forward, the organization wants to broaden its reach to under-served communities in the Richmond/Hayward corridor and to the newly diagnosed with a peer mentoring program, and offer activities for people who are still in the workforce.

Karen Garrison, an engaged member of PD Active, lives in Berkeley. She was 61 in 2011 when she first developed major symptoms. Today, seven years later, Karen attends Dance for PD class, Rock Steady Boxing class and occasional yoga and PWR!Moves classes. She is planning to start a mentoring group to assist the newly diagnosed.